I had a nice after-work drink with my boss and colleagues last week.
When talk turned to work and how much we're cleaning stuff, I asked him why he got me for the role. His straight answer was, "Hindi ka kasi natatakot mahirapan." (You're not afraid of hardship)
That made me reflect on myself.
I take it that I'm not afraid of hard work and that I can handle anything that's thrown at me. At the same time, I'm thinking whether I'm a sucker for punishment.
The past 6 months at my new job was not exactly a walk in the park. There were so many late nights literally burning the midnight oil as there were so many things that I had to do as my unit was literally a hodge-podge of everything.
Amazingly, I'm not complaining. I guess my boss knows how to challenge me. Suffice to say, the job satisfaction that I've been looking for the past 25 years, I found it now.
at May 22, 2022 No comments:

Email ThisBlogThis!Share to TwitterShare to FacebookShare to Pinterest
Labels: work

I just found out about my youngest son's tuition yesterday. Good thing my husband asked me to sit down first before showing me the list of tuitions and fees.

I haven't publicly shared it but B2 was diagnosed with Autism, as such, the need for therapies and special education.

Since he can't go to a mainstream school, we had to put him in SPED. Fortunately, we found a SPED school within the village but I was taken aback by the price. I initially balked but my husband pushed that we should go for it since it's for the education of our child. Nevertheless, I still can't get over my shock.

Looks like there will be a LOT of belt-tightening this year. Should seriously push to declutter. Sigh.

Ever since I started my new job, I haven't seriously watched a new Kdrama. I would watch the one-time drops and maybe a few movies, but looking at my list, nothing new.

I'm not sure if it's because of my working schedule. I work longer hours compared to my previous job but I'm happier and more challenged. I'm literally out of my comfort zone and still trying to grasp the concepts of what I'm doing.

Granted that my boss literally plucked me from my previous company and placed me here, I know I can't fully depend on him to teach me on what to do. I had to learn things by myself and find my own answers. Or maybe because I thrive on the way he teaches.

I'm the type who learns from experience and my task involves writing multiple papers. I've experienced submitting three papers and all of them returned to me with major overhauls. I'm used to it by now but I hope the time will come when he immediately approves what I send. I would feel dejected when that happens but I would pull myself up and re-do what he asked me to do.

Going back to why I brought up my Kdramas. I'd usually watch them during my free time but I would turn off my laptop earliest at 9PM while last night, I was working until midnight. During weekends, I would rather sleep or go out with my family. Also, for some reason, no drama would appeal to me. Maybe because I'm looking for something grittier or darker?

Anyway, still working from home today. Prefer the peace and quiet here so I can write properly. Sigh.

Email ThisBlogThis!Share to TwitterShare to FacebookShare to Pinterest
Labels: work


I usually start the day by writing in my journal, but I left it in the office as I requested to only work from home 3x/ this week. Fortunately, I was granted permission considering the atrocious gas prices these days.

Summer has officially began and I could feel it in the afternoons. I've forgotten how hot it is and since our bedroom is located at the second floor, it can get uncomfortably warm in the evening (hot air goes up etc etc). For the first time in months (and ever since I set up the AI in our bedroom), I brought the aircon temp down to 21 with high fan. If this was during the cold months and that kind of aircon temp, we'd be bundled up in sheets and a comforter. But nowadays, we're comfortable enough with a thin blanket.

Mondays are so hard. It's difficult to jumpstart my brain to start working as it refuses to leave the relaxed state it's in. No wonder people detest Monday meetings. I *should* start working now. *sigh sigh sigh*

Pressure is a Privilege 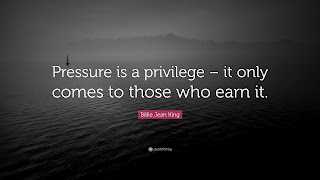 My new job has been very interesting. Not only is it different from what I used to do, the pressure is also real. But at the end, I'm still happy.

I moved jobs because I followed my previous boss. Out of all the immediate supervisors I had, he was the only one that really got me. He knew how to motivate me to be a better version of myself and it was through pressure.

My responsibilities involves numerous  projects and he gave me deadlines which made me question my capabilities. Amazingly, I still get to meet his expectations. I love sitting in meetings with him because I get to pick his brain and I get to learn a lot. He managed to impress most people the almost one year that he was with the company.

When I was given a new task just this week, he mentioned the above quote which we got from a speaker in one of our office functions. I guess I'm very privileged as the pressure is real. Granted that he's the only one pressuring me but I truly enjoy the challenge. I take pride in the fact that he handpicked me so I can execute all the projects and enhancement that he wants.

The amount of work that I do now is more than what I used to do. But I am truly happy and satisfied with what I do. It's amazing that I get to discover and learn more things at my age.

When my husband asked me if I wanted to watch The Batman, I automatically said yes because it's the first time in more than two years that we'll be able to watch a movie at the cinema. I didn't care what film it was as long as I get to watch it on screen.

I did not even research what the movie was about. I just got the details literally minutes before the screening. I'm just like, ok, it's another superhero movie. Yey. For the life of me, I forgot that this was the movie starring Robert Pattinson--my Twilight crush. My husband even teased me for being a fake fan for not knowing about it.

Funny that after the movie, I suddenly remembered you and got sad all of a sudden. I recall how much you loved the Joker, Batman and even Star Wars. If there was no pandemic and you're still here, you would've rented out a moviehouse again and watched it with your friends. You would've nitpicked the suit or even Rob's voice. Maybe we would see each other the Monday after and dissected the story or even that ending.

It was a very morose on the drive home. I wanted to just drive out onto the highway and talk to you in my head. But my head was telling me that I just filled up my tank and gas is very expensive as hell.

I'm interested what would be your take in this version but as for me, I liked it. In the past Batman movies, the Bruce Wayne persona is always handsome, dashing or well put together. But this Bruce Wayne, Rob played him to be tortured and brooding which is more realistic for an orphan who chose to be a recluse. Even if I'm not a fan of Rob whenever he's interviewed, he plays characters so well--whatever they may be.

I really like the version of this batsuit (though it's interesting that he was never called "Batman" during the whole film). I would've discussed it with you more in detail. So many things we could've talked about (sigh).

I ended up messaging your wife to ask her to have lunch next week. I don't know if she has watched it but I'll certainly tell her about it.

Looking forward to the day when we can get to talk about this--and other movies that you might have missed.

Take care up there.

It's amazing that I was able to write as much as I did last year. It was the most number of posts that I had for a whole year for the longest time. I don't know what caused me to be prolific but I'm not complaining. The posts waned though towards the end of the year when I moved to another company.

I've been with this new company already for three months and so far, I'm happy with what I'm doing. I'm still missing some sort of direction but I feel productive. I

I'm able to fix the issues the are thrown my way through I think I can do more if I manage to wrap my head around the processes and stuff. Sometimes, I miss my previous company because I already know my way around the bureaucratic bullshit that happens inside a company. This time around, I'm still learning and hoping that I don't get to step on any sensitive toes.

I already met someone who I'm not comfortable with. Fortunately, I don't need to work with her a lot.

I haven't left the house since Jan 4. That was more than 2 weeks ago. Good thing I'm cleared already so I can breathe a different kind of air. I'm too cooped up as it is. Hopefully, I've developed some sort of immunity already because of my recent bout with COVID. I'm glad I'm vaccinated and boostered at that.

I'm more productive lately compared to going to the office. Maybe when things get stressful then I would welcome the change of atmosphere. As it is, my mandate now is to work from home for the meantime until we're called back. Though I would need to go to the office to get some stuff. Hopefully, my boss will allow me.

I Am Therefore I Am

Sunshine
Muntinlupa City, METRO MANILA, Philippines
When my friend influenced me to start this online journal, "blog" was not yet a household word and I was getting ready to live the rest of my life in a state of single-blessedness.
But I met a person who persuaded me to change my civil status and we now have a couple of bundles who not only brings us joy but one we can charge as tax deductibles.
Other than peacefully cohabiting with my significant other, our two joyful bundles, and my husband's well-traveled parental units (and a partridge in a pear tree) down Metro Manila South, I'm currently working hard for one of the fastest growing banks in the country and hoping to retire by the age of 55.

Getting to Know Me